Globally, dementia cases are increasing at a rate of more than 20% a year. Most of these cases are in low- to middle-income countries. In a special supplement to the Journal of Alzheimer's Disease, from the International Research Network on Dementia Prevention (IRNDP), an international group of scientists presents new research from around the world examining the potential risk factors for dementia and how to reduce them.

"This IRNDP issue demonstrates impressive progress in dementia prevention research and provides an invaluable collation of recent research and an up-to-date overview of the dementia prevention evidence base," commented Guest Editors Ruth Peters, PhD, and Kaarin Anstey, PhD, both of the University of New South Wales and Neuroscience Research Australia, Sydney, Australia. "It also serves to highlight the substantial remaining evidence gaps and the next steps forward in this area of research. We have already achieved a lot, but now is the time to refine and develop our understanding to be able to build the next generation of dementia risk reduction interventions with translatable and applicable policies to protect human cognitive health."

With no cure for neurodegeneration or the diseases that cause dementia, there is an urgent need to link both knowledge translation and researchers more closely together in a global effort to tackle prevention more effectively. In this issue noted experts around the globe report on some of the ongoing and crucial risk reduction trials and highlight some of the population level considerations and the remaining evidence gaps.

"Alzheimer's disease (AD) is increasingly recognized as a chronic age related disease resulting in part from a lifetime of what we do and do not do. There may be no magic pill or vaccine to cure AD, but there can be a lifetime of prevention. Evidence-based guidance of best practices is essential as we work to improve brain health throughout the world," noted George Perry, PhD, University of Texas at San Antonio, and Editor-in-Chief of the Journal of Alzheimer's Disease.

Up to 30% of all late-life dementia is believed to be attributable to potentially modifiable risk factors. Risk factors for dementia include obesity, social isolation, and vascular and lifestyle factors such as diabetes or smoking. Other factors recently linked to dementia risk include poor kidney function, chronic obstructive pulmonary disease, sleep disorders, and air pollution.

Ruth Peters and colleagues examine evidence associating air pollution with later cognitive decline and dementia. Exposure to air pollution, especially fine particulate matter, is associated with factors such as inflammation, and higher cardiovascular risk including risk of stroke, which also raise the risk of cognitive decline and dementia. They conclude there is evidence to suggest a link, and that while more research is needed, further regulation and reduction of exposure has huge potential for health benefits and cost savings including potentially reducing dementia risk. "The growing evidence linking pollution to dementia emphasizes the need to address this problem," noted Dr. Peters.

Articles on risk reduction report on protocols for two of the many ongoing trials in dementia risk reduction: the Systematic Multi-Domain Alzheimer's Risk Reduction Trial (SMARRT) and the Maintain Your Brain trial; important adherence data from the Australian Imaging Biomarkers and Lifestyle (AIBL) active-study; and an evaluation of an online health education tool for older adults in Malaysia. An associated editorial raises related questions on future trial design, intensity of intervention, and populations to target.

Contributors also examine some of the gaps in the evidence and draw attention to the lack of data across age ranges and in global populations. In a major, and important, synthesis of the global observational literature on risk factors for dementia, Kaarin Anstey and colleagues pull together the results of 40 systematic reviews. They summarize risk factors for AD, vascular dementia, and any dementia and highlight the lack of evidence for many risk factor exposures in midlife and a lack of data on risk factors for vascular dementia and from low- and middle-income countries. They identify important gaps in the literature and map out the findings in relation to age of exposure and geographical region. A related editorial focuses on the need for a life-course understanding and the importance of risk factor prevalence or saturation in particular populations or those with relatively small numbers (such as indigenous Australian populations). "Working together globally to understand risk factors for dementia relevant to specific populations, and how to bring about population level change in levels of risk, are key goalsl of the IRNDP," commented Dr. Anstey.

They point out that, after adjusting for non-independence of risk factors, 24% to 40% of dementia cases could be related to seven potentially modifiable risk factors in Mozambique, Brazil, and Portugal: low educational attainment, physical inactivity, midlife hypertension, midlife obesity, depression, smoking, and diabetes. Reducing the prevalence of each risk factor by 20% per decade could, by 2050, potentially reduce the prevalence of dementia in Mozambique, Brazil, and Portugal by 12.9%, 16.2%, and 19.5%, respectively. An associated editorial draws together the key threads in this area and highlights the nuanced nature of practical dementia risk reduction, observing that in the absence of disease-modifying treatments, population-based approaches examining dementia prevention have the potential to play a key role in reducing the incidence and impact of dementia worldwide. 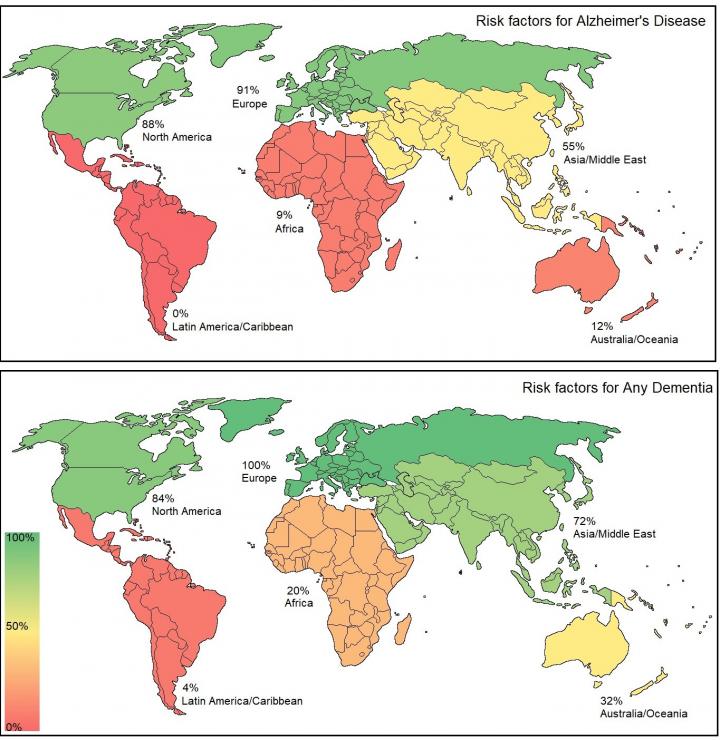 "There are lots of exciting interventions underway and the field is now burgeoning with exciting new findings that can help develop practical advice on dementia risk reduction," noted Dr. Peters. "We expect results of several large interventions to become available in the next three to five years and are hopeful that will lead to significant advances."

"Working together globally will accelerate discovery and implementation," added Dr. Anstey. "Gathering evidence that is relevant to specific population groups and that can be translated into culturally acceptable and specific interventions is crucial. Science needs to inform policy and public messaging.

"Dementia risk factors come from multiple domains and it will take a concerted, interdisciplinary approach to tackle at local, national and global levels. Communication strategies for risk reduction will need to be culturally and country specific, and intervention work in this field is still preliminary in terms of demonstrating that dementia can be delayed or prevented. There is much work to be done!"